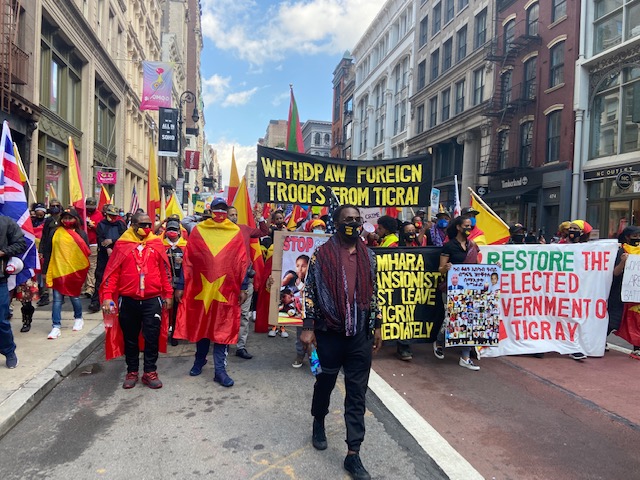 Lies and deception have become a mode of Operandi for the unelected fascist regime headed by the caretaker regime that expired his mandate six months ago. Under his leadership, Ethiopia has sunk to the bottom with his stooges who have no sham to lie, despite all evidence that is being committed against Tegaru  Ethnic cleansing, genocide, rape, and looting. The UN High Commissioner for Human Rights will lunch an investigation, what is taking place in our Tigrai and Tegaru massacre, executions, sexual violence as a weapon in the conflict area, and looting by Eritrean paid mercenaries, Abiy Defence Forces, and savage Amhara Militia. It is not a disputed land, it is land taken from Tigrai by the feudal regime in 1947-1990 by brute forces. There is no shared evidence that this area belongs to the Amhara expansionist.  Michel Russel in his book titled “Nubia and Abyssinia Comprehending Their Civil History, Antiquities, Arts, Religion,  Literature, and Natural History” New York  J & J Harper  1833 attests to the fact it was Tigrai territories. Now, Abiy is putting Tigrai on the altar plate to stay in power. Ethiopia sovereignty is nothing to Abiy but staying in power is everything, what a shame. This is because his illegitimate party has to put more value to its existence above and beyond anything else, just like any single uncontested political party. On a structural level, PP is no different than the regime in Eritrea, both hang on to power as long as necessary at any cost. Shame Ethiopians and their morbid followers, we have enough of you. Our resistance will be continued, whatever it takes.

Four months after the Ethiopian government declared victory over the rebellious Tigray People’s Liberation Front (TPLF), tens of thousands of Tigrayans are again being driven from their homes.

This time, it is due not to the fighting, but to regional forces and militiamen from neighboring Amhara seeking to settle a decades-old land dispute, according to witnesses, aid workers and members of Tigray’s new administration.

Amhara officials say the disputed lands, equal to about a quarter of Tigray, were taken during the nearly three decades that the TPLF dominated central government before Prime Minister Abiy Ahmed came to power in 2018.

Ababu Negash, 70, said she fled Adebay, a town in western Tigray, after Amhara officials summoned Tigrayans to meetings in February.

“They said you guys don’t belong here,” Ababu told Reuters in Shire, a town 160 km to the east, to where many from west Tigray are fleeing. “They said if we stay, they will kill us.”

This fresh exodus from the west of Tigray risks exacerbating a precarious humanitarian situation in the region, with hundreds of thousands of people already uprooted by fighting. The territorial dispute is also being carefully watched by other regions in Ethiopia’s fractious federation, some with their own simmering border disputes.

Fighters from Amhara entered western Tigray in support of federal forces after the TPLF, Tigray’s then-governing party, attacked military bases there in November. They have remained ever since, and Amhara officials say they have taken back a swathe of territory that was historically theirs.

Tigrayan officials say the area has long been home to both ethnic groups and that the region’s borders are set by the constitution. Now that fighting has subsided and roads have reopened, they say there is a concerted, illegal push to drive out Tigrayans.

Reuters interviewed 42 Tigrayans who described attacks, looting and threats by Amhara gunmen. Two bore scars they said were from shootings.

“The western Tigray zone is occupied by the Amhara militias and special forces, and they are forcing the people to leave their homes,” Mulu Nega, head of Tigray’s government-appointed administration, told Reuters in Tigray’s capital Mekelle.

He accused Amhara of exploiting Tigray’s weakness to annex territory. “Those who are committing this crime should be held accountable,” he said.

Asked about the accounts of violence and intimidation by Amhara fighters, Yabsira Eshetie, the administrator of the disputed zone, said nobody had been threatened and only criminals had been detained.

“No one was kicking them out, no one was destroying their houses even. Even the houses are still there. They can come back,” he said. “There is federal police here, there is Amhara special police here. It is lawful here.”

Gizachew said Amhara was now administering the contested territory, reorganising schools, police and militia, and providing food and shelter. Tigrayans were welcome to stay, he said, adding that Amhara has asked the federal government to rule on the dispute and expected a decision in coming months.

He did not respond to requests for comment on the accusations of violence and intimidation by Amhara fighters.

The prime minister’s office referred Reuters to regional authorities to answer questions about the land dispute and the displacement of Tigrayans, who make up around 5% of Ethiopia’s 110 million people. There was no response from a government task force on Tigray or the military spokesman.

In a speech to parliament on March 23, Abiy defended Amhara regional forces for their role in supporting the government against the TPLF. “Portraying this force as a looter and conqueror is very wrong,” he said.

The United Nations has warned of possible war crimes in Tigray. U.S. Secretary of State Antony Blinken said this month there have been acts of ethnic cleansing and called for Amhara forces to withdraw from Tigray.

Ethiopia’s government strenuously denies that it has an ethnic agenda.

“Nothing during or after the end of the main law enforcement operation (against the TPLF) can be identified … as a targeted, intentional ethnic cleansing against anyone in the region,” the foreign ministry said in a statement following Blinken’s remarks.

Reuters could not determine how many people have fled west Tigray in recent weeks as families move frequently, many stay with relatives, and some have been displaced several times.

Local authorities and the U.N. Office for the Coordination of Humanitarian Affairs (OCHA) said about 1,000 were reaching Shire every day, with 45,000 coming since late February.

The Norwegian Refugee Council said between 140,000-185,000 came from west Tigray over a two-week period in March.

Tewodros Aregai, interim head of Shire’s northwestern zone, said the town was hosting 270,000 displaced people even before the latest influx and did not have enough food or shelter.

Four centres set up to house new arrivals are near-full. Families cram into classrooms, halls and half-finished buildings. Others camp under tarpaulins or on open ground.

Ababu said she and her family reached Shire at the beginning of March. She fled her farm in November, when she said Amhara regional forces killed civilians in nearby Mai Kadra after taking the town with federal forces. She said she spent three months in Adebay but was forced to leave at the end of February.

Reuters could not independently verify her account. Communications in Tigray, a mountainous region of about 5 million people, have been patchy since the conflict began and the region was off-limits for most international media until this month.

Amhara officials in Mai Kadra deny that Tigrayans were attacked there, although dozens of displaced residents provided similar accounts.

The 42 Tigrayans interviewed by Reuters as they fled from the west said they were now being evicted en masse.

“They (Amhara forces) circulated a paper saying, ‘If you don’t leave the area within two days, you will lose your lives’,” said Birhane Tadele, a priest from the west Tigray village of Rewasa. “Then they took all the cattle and everything in the house.”

Birhane said he fled to Humera, a town in the disputed zone, but could not stay because Amhara gunmen were rounding up people with Tigrayan IDs and imprisoning them. He now lives in a school in Mekelle.

Two other Tigrayans also described such roundups in Humera, and three described similar circulars at other locations demanding they leave. Reuters could not independently verify their accounts.

A farmer from Mylomin, a small village in west Tigray, showed Reuters scars on the stomach and back of his five-year-old son Kibrom, whom he said was shot when the Ethiopian army arrived on Nov. 9 with its Amhara allies.

The farmer, who did not want his name published for fear of reprisals, said he took the boy to Gondor hospital in Amhara. When they returned, neighbours told him Amhara gunmen had stolen his 60 cattle and other belongings. He now lives with his family in a Mekelle schoolyard.

Reuters was unable to reach officials in Mylomin for comment on his account of the fighting. Officials at Gondor hospital said they received an influx of patients with injuries from violence in early November but did not give details on specific cases.

Reporting by Reuters in Shire; additional reporting and writing by Silvia Aloisi in Milan; editing by Alexandra Zavis and Andrew Cawthorne