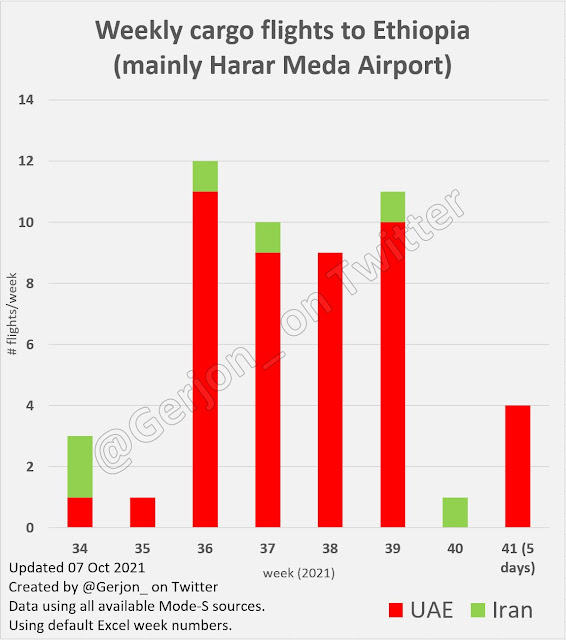 By Stijn Mitzer and Joost Oliemans in collaboration with Gerjon

Amidst an increasingly deterorating security situation throughout large parts of northern Ethiopia, the Ethiopian National Defence Force (ENDF) has embarked on an international shopping spree in an effort to acquire new weapon systems that could help it to halt the seemingly unstoppable advances of Tigray forces. As part of its efforts, Ethiopia has sought to acquire arms from countries like the UAE and Iran. Recent data collected by aircraft tracker Gerjon reveals the scale of the air bridge maintained by these countries to keep the ENDF supplied with all the weaponry and equipment it needs. [1]

In 53 days, at least 51 suspicious cargo flights reached Ethiopia, most of them landing at Harar Meda air base. A total of 45 of those cargo flights originated in the UAE while six came from Iran. In the latter case, it can be presumed that the Boeing 747 and Il-76 cargo aircraft used carried Mohajer-6 unmanned combat aerial vehicles (UCAVs) confirmed to have been delivered to Ethiopia onboard, although the delivery of other types of Iranian weaponry to the ENDF can’t be ruled out either.

In order to maintain plausible deniability, the UAE uses a number of front companies for the delivery of weaponry to countries where it has no official involvement. This was previously witnessed in Libya, where the UAE sought to overthrow the internationally-recognised government of Libya by installing warlord Khalifa Haftar as the ruler of Libya. To deliver arms and equipment to Ethiopia, the UAE makes use of the UAE-based Fly Sky Airlines (flying Il-76 cargo aircraft registered in Ukraine and Kyrgyzstan).

When also including suspicious cargo flights from China the scale of the air bridge becomes even more extensive. In mid-September 2021, an An-124 of Ukraine’s Antonov Airlines flying out of Chengdu, China landed at Harar Meda air base after a brief stopover in Islamabad, Pakistan. [2] It is currently believed that this aircraft carried several Chinese-made Wing Loong I UCAVs and associated equipment onboard. Perhaps not by accident, the Wing Loong I is manufactured in Chengdu. The Wing Loong Is add to a growing arsenal of UCAVs recently purchased by Ethiopia, so far confirmed to include types from the UAE and Iran. [3] [4]

Although the contents of most of the aircraft’s cargo can currently only be guessed at, they are almost certain to contain military-grade items, with humanitarian aid instead delivered to the country’s civilian airports. The Il-76s operating on behalf of the UAE regularly land (sometimes twice daily) as Iranian aircraft of the same type bring in weapons systems as well, a clear indication of the sheer volume of arms being shipped to Ethiopia on a daily basis.

Despite the large number of cargo flights going back and forth between Ethiopia and the UAE, surprisingly little weaponry and equipment originating from the UAE has so far been sighted in Ethiopia. Weaponry known to have been recently delivered to Ethiopia by the UAE include a type of VTOL unmanned aerial combat vehicle (UCAV) armed with two 120mm mortar grenades and several types of small arms from the Caracal company. It should be noted that in the latter case these small arms were already sighted in Ethiopia before the outbreak of the Tigray War in November 2020.