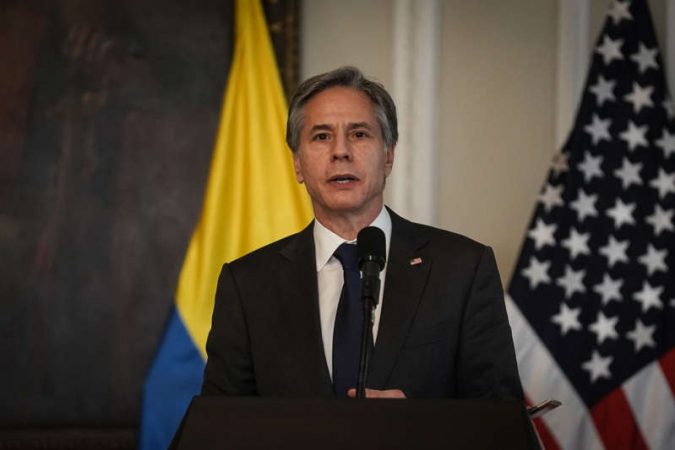 (Bloomberg) — The U.S. is “very concerned” about the potential for Ethiopia to implode, Secretary of State Antony Blinken said on Friday as the U.S. ramped up sanctions over the conflict.

Farmers Take on ‘Post-Apocalyptic’ Food Crisis
“One path forward is out-and-out conflict which could lead to the implosion of Ethiopia and spill over into other countries in the region,” Blinken told reporters during a news conference in Washington with Qatar’s foreign minister. “The other path is to halt all of the military actions that are currently underway, to sit down, to negotiate a real cease-fire.”

Blinken plans to travel to Kenya, Nigeria and Senegal next week, and the conflict in Ethiopia will be high on his agenda. The U.S. is giving ongoing talks space to progress, Blinken said, and warned that the U.S. could still sanction the Ethiopian government and the TPLF.

On Friday, the U.S. Treasury Department issued sanctions on Eritrean entities including the Eritrean Defense Force and the People’s Front for Democracy and Justice, the ruling party in Eritrea.

Eritrean forces have been involved in the Ethiopian conflict siding with the federal forces, sending in troops from the start and have been accused of perpetrating some of the worst atrocities recorded since fighting erupted.

The yearlong war there has killed thousands of people, displaced hundreds of thousands more and led the United Nations to warn that more than 400,000 people were at risk of starvation in what was one of the region’s fastest-growing economies. More than 1 million people are viewed as needing humanitarian aid.

Tensions with the TPLF, the country’s preeminent power broker for decades, intensified after Abiy began sidelining the group right after he came to power in 2018.

The discord exploded into violence last November, when Abiy ordered a military incursion into Tigray after the TPLF attacked a military base. Abiy initially declared victory after taking over the region’s capital, Mekelle. The government offensive has since failed to defeat the rebel forces, and they are now about 186 miles (299 kilometers) from the capital, forcing the government to declare a state of emergency.

Mass Detentions
The rebels have threatened to march on the capital, with a newly formed alliance of rebel groups including the Oromo Liberation Front. The U.S. and U.K. are among countries that have advised their citizens to leave the country.

Amnesty International on Friday accused Ethiopian security forces of targeting Tigrayans, including children and the elderly, with arbitrary arrests and mass detention. The rights group reports of hundreds of Tigrayans being detained across several locations in the capital, Addis Ababa.

“These mass arrests have instilled such a climate of fear that Tigrayans that Amnesty International has spoken to are scared they could be rounded up any time,” said Sarah Jackson, Amnesty International’s deputy regional director for East Africa, the Horn and the Great Lakes. “Those currently locked up have not been charged or brought before a court and many have been targeted purely on the basis of their ethnicity.”

Earlier this week, the United Nations said 16 staff members and some 70 truck drivers contracted by the UN were detained in Ethiopia.

Both parties to the conflict have been accused of committing violations that may amount to war crimes and crimes against humanity, the Ethiopian Human Rights Commission and the United Nations Human Rights Office found in a joint investigation.

Most Read from Bloomberg Businessweek