Tigray: Why are soldiers attacking religious heritage sites?
There are reports of Ethiopian and Eritrea troops going out of their way to loot and destroy beloved churches, mosques and monasteries.
In Ethiopia, it is customary for large crowds to gather on the last week of November at the country’s holiest site, the Church of St Mary of Zion in Axum. Every year, followers of the ancient Ethiopian Orthodox faith, who constitute roughly 60% of the population, join each other to celebrate the presence of the Ark of the Covenant in what is one of Ethiopia’s most important religious festivities. 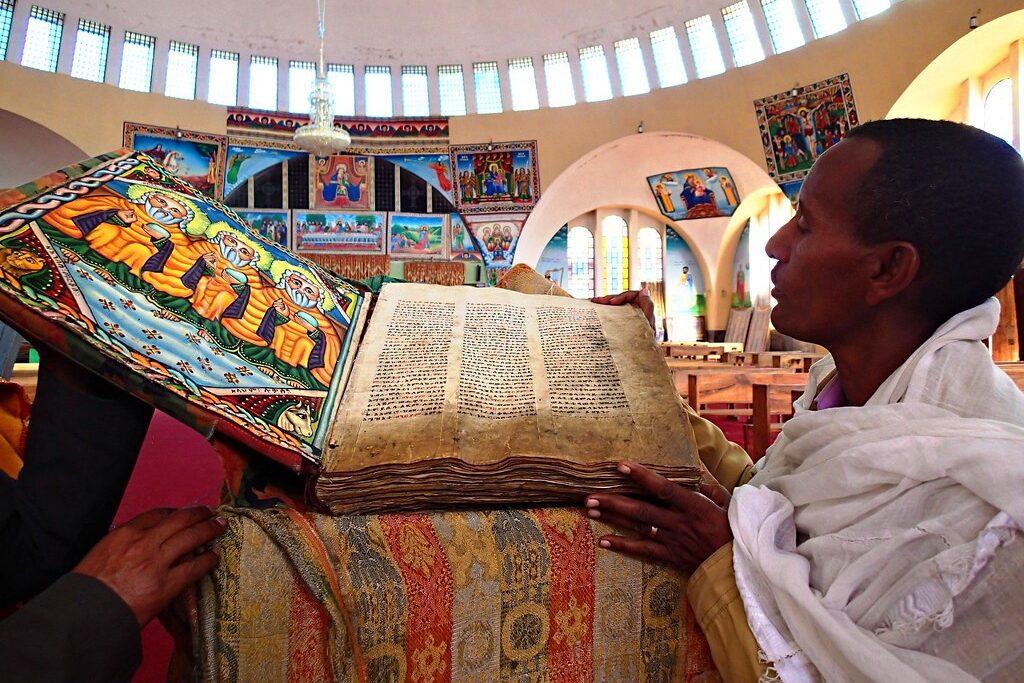 This November, however, the Church of St Mary of Zion was crowded for a different reason. A week earlier, Ethiopian and Eritrean soldiers had arrived in Axum as part of the federal government’s war with the Tigray People’s Liberation Front (TPLF). By 28 November, two days before festivities would normally have begun, many people had gathered in the church to find refuge, worship, and protect what is believed to be the Ark of the Covenant from being stolen. According to a deacon at the church, soldiers burst into the church, dragging worshippers out and shooting at people as they tried to escape. The witness estimated that 800 people were massacred that weekend at the church and in the city.
An Amnesty International report based on over 60 interviews described how: “Over an approximately 24-hour period on 28-29 November, Eritrean soldiers deliberately shot civilians on the street and carried out systematic house-to-house searches, extrajudicially executing men and boys”.
As well as attacking people, there is also evidence of soldiers engaging in widespread looting, including of religious heritage sites both in Axum and more widely in Tigray. A recent report from the Europe External Programme with Africa describes how “Eritrean troops climbed onto the 6th century [Debre Damo] monastery and looted old manuscripts and treasures”. Despite the information blackout, reports and images have also emerged of soldiers damaging many other important sites, from several ancient churches to the 7th century Wukro al-Nejashi mosque, one of the world’s oldest and most important Islamic sites.
Why would the Ethiopian authorities allow for the assault on sites that are holy not just for Tigrayans but for many across the country? The first possible reason is that it is part of a scorched earth policy: everything is erased to the ground as avenging troops advance. However, this does not explain the destruction of difficult to access sites such as the Debre Damo Monastery which can only be reached by scaling 80ft cliffs. Another explanation is the economic gain of selling stolen items, but this does not explain why buildings were destroyed after the looting.
The most persuasive explanation is therefore perhaps that this strategy is aimed at humiliating and demoralising the population to break the community’s resolve and spirit. In its most extreme form, this is known in international law as cultural genocide. The intended effect is to erase people’s attachment to the land, uprooting them not only physically, but psychologically. Destroying religious sites is a powerful instrument in this approach.
This explanation would also be consistent with claims in a leaked US report which suggests that “Ethiopian officials and allied militia fighters are leading a systematic campaign of ethnic cleansing in Tigray”. The document claims that Amhara militias are involved in “an apparent campaign to force out the ethnic Tigrayan population under the cover of war”.
Hope and humanitarians
It is perfectly understandable that humanitarian actors focus their emergency responses on saving lives rather than saving heritage. There are 4.5 million people in the Tigray region who urgently need food aid. However, there needs to be a distinction between what is prioritised and what is recognised. Many of whose who were allegedly massacred in the Church of Zion were there to worship and protect their religious heritage. Simply seeing them as victims of ethnic violence is reductionist and does not help to capture the full spectrum of assaults on their multiple identities.
Moreover, in supporting survivors and holding perpetrators accountable, it is essential to recognise the many ways in which people have been assaulted. The distinction of seeing humanitarians’ jobs as saving lives and heritage experts’ jobs as saving artefacts is problematic. Eyewitness evidence about who desecrated holy sites may be critical for bringing perpetrators to justice and the restoration of holy sites can be crucial to rebuilding a community’s sense of joy, pride and belonging. It gives hope for what they will pass on to future generations.
One hopes that the armed conflict in Ethiopia comes to an end soon and that both the people and sites that are dear to them are restored. Perhaps this November, the sacred Church of Zion will commemorate the dead as well as seeing the return of one of Ethiopia’s most significant religious festivities. However, this will only be possible if we recognise the importance of heritage sites both as a target in war and as a critical part of justice and restoration after it.