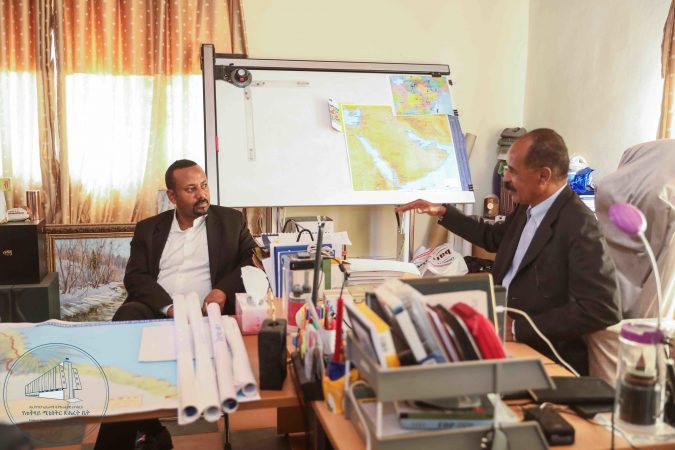 abiy ahmed
Ethiopia’s Prime Minister Abiy Ahmed speaks during a joint media conference with South African President Cyril Ramaphosa after their talks at the Union Building in Pretoria, South Africa, Sunday, Jan. 12, 2020. (AP Photo/Themba Hadebe)
Since his accession to power in 2018, life has not been a straight line for reformer Abiy Ahmed, and its not about to get ironed out any time soon.

Early efforts at opening up won him praise, including emptying the jails of political opponents of the regime, and mending relations with neighbouring Eritrea.

Since then, the loosening of the tight grip of the ruling EPRDF (Ethiopian People’s Revolutionary Democratic Front ) has allowed previously frozen conflicts to explode into life – including demands for greater autonomy from several parts of the country, not least Oromia, from where Abiy himself is from.

Political assassinations, including the head of the army and more recently a popular Oromo singer, have reawaken fissures across the country that had seemingly just begun to creep out of sight, leaving Abiy to face four great challenges:

His relationship with Oromia
The tricky diplomacy of filling the GERD dam
Managing his relationship with Eritrean leader Isaias Afwerki
Elements of the Tigray People’s Liberation Front who were removed from power
1. The Oromo Question
The 29 June shooting of musician Hachalu Hundessa in Addis Ababa triggered massive protests in the Oromia region, leading to hundreds of deaths and thousands of arrests.

The Ethiopian government announced on Friday 10 July that it had arrested two men suspected in the murder case.

After a week of investigations amidst the deadly protests, which reignited multiple internal crises in the East African nation, PM Abiy Ahmed’s attorney general said that Hachalu’s killers had acted on the orders of the Oromo Liberation Front splinter group OLF-Shane, according to a report by Reuters.
While the arrest of two of Hachalu’s killers may solve the question of the perpetrators’ identities, and even what their motives were, events since the murder have reignited the Oromo Region’s powder kegs.

Africa Insight
Wake up to the essential with the Editor’s picks.
Email Address

And for PM Abiy, who described the musician’s murder as “an evil act” in his eulogy, the Oromo question is just one of multiple Herculean tasks he’s currently facing.

Abiy Ahmed’s rise to power in 2018 was midwifed by protests mostly by the Oromo, who constitute more than a third of the country’s 100 million people. As the first Oromo leader in the country’s history, the 43-year-old’s ascension to power was meant to herald a new beginning, particularly for the ethnic group.

From the onset though, it was clear he would have a hard time balancing the numerous issues including Oromo grievances, those of other ethnic groupings, and the unity of the Ethiopian state.
Hachalu’s murder, for example, was quickly followed by the pertinent question of where he would be buried.
READ MORE Ethiopia: Turmoil over Hachalu’s burial reignites mass Oromo protests

Abiy’s administration’s insistence that he be buried at his birthplace is a large part of the reasons why the protests worsened in the days following the murder, especially after the arrest of a known Oromo activist, Jawar Mohammed, and other prominent Oromos.

Since the initial wave of optimism at the start of his term in 2018, PM Abiy’s national political reforms have worked against him among the Oromo, with a significant number of who now view him as detached, if not following in the footsteps of his predecessors, as seen following the recent protests.

“Due to the unrest that occurred in the region, nine police officers, five militia members and 215 civilians have lost their lives,” said the regional police chief in a report by Al Jazeera.

“To control this unrest, more than 3,500 suspects have been arrested,” he added. But many of those arrested were no stranger to being detained by the Ethiopian state. Their current presence and freedom was in fact a direct consequence of Abiy’s early reforms.

Fast-forward to the present where their arrests and the language surrounding them become eerily familiar, such as when the regional police chief refers to them as “anti-peace elements…using the artist’s death as a pretext to dismantle the constitutional system by force.” Many fear now that PM Abiy is taking two steps back after having taken one mighty step forward.

2. The Waters of the Nile
The most existential regional crisis on PM Abiy’s plate right now is the Grand Ethiopian Renaissance Dam (GERD). After multiple attempts at failed diplomacy, the window of opportunity for a consensus before Ethiopia starts filling the dam is just about closed.

Egypt’s increasingly desperate attempts to hammer out a deal with Addis Ababa have always carried the risk (and threats and counter-threats) of military action.

Ethiopian Prime Minister Abiy Ahmed’s water minister denied reports that the country had begun filling its GERD, according to a report by the Associated Press on 15 July.

According to Sileshi Bekele – the Ethiopian minister of water, irrigation and energy – the satellite emergency capture on 9 July by a European Space Agency shows a natural pooling due to flooding, and not the deliberate, scheduled, filling of the controversial dam.

Associated Press also reported that Ethiopia’s neighbour and host of the meeting point of the Nile’s main tributaries, Sudan, had “expressed skepticism” over Ethiopia’s recent activities. Addis Ababa has repeatedly expressed its intention to start filling the dam in July, much to the chagrin of its downstream neighbors, particularly Egypt.
“Water levels at its al-Dayem station on the Blue Nile show a decline of 90 million cubic meters per day,” Sudan’s irrigation Ministry said in a statement.
LISTEN GERD: 1959 Egypt/Sudan treaty -‘The worst agreement Khartoum could have signed’

The latest developments are the culmination of years of failed negotiations, as well as construction delays when the work was being done by the Ethiopian military consortium. From the start of his term in early 2018, Abiy Ahmed made completing the dam a central issue of his term, hoping to begin filling it before the planned, but now postponed, election in late 2020.

Now, the 9 June satellite images have thrown a spanner in the works, as they were taken just after the latest round of negotiations failed. Sudan’s confirmation of the decline in water levels will most likely make Bekele’s denial seem untrue, and could escalate the tense situation among the three countries, or even worse among all those in the Horn of Africa.

3. The Book of Isaias
In late 2019, PM Abiy Ahmed won the Nobel Peace Prize for, among other reasons, making peace with Ethiopia’s former colony, Eritrea. Abiy’s rapprochement with Eritrea’s Isaias Afwerki was supposed to mark a new chapter in the relationship between the two countries, solving a long-running mutual hostility.

In May, Ethiopia’s President Sehle Work-Zewde, PM Abiy Ahmed and his predecessor Hailemariam Desalegn, hosted Afwerki. “We hosted him in the stunning park coming up on Entoto mountain, a truly amazing place to relax and unwind,” President Work-Zewde said in a tweet.

But despite the blossoming friendship between the two neighbours, Afwerki has made efforts to show that he is on friendly terms with everyone in the region; including those who have more strained relations with Addis Ababa.

Just a few days before Hachalu’s murder, President Isais flew to Khartoum for a three day visit where he and Sudan’s new leaders discussed “regional issues of interest to the two countries.”
Then, on 5 July, President Isaias landed in Cairo to visit his Egyptian counterpart Abdel Fattah al-Sisi, where “the two leaders held frank and extensive discussions on bilateral relations and regional developments.”
His visits to his regional neighbours, in the midst of a pandemic, are in part to prove that he is still alive and healthy. There had been rumors among the Eritrean community of exiles that his absence from the limelight meant he was sick.

President Isaias may have wanted to make a strong statement that not only was he in good health, but that he still maintains positive relations with Abiy and was still active in regional diplomacy,” William Davison, International Crisis Group (ICG) senior analyst for Ethiopia told Kenya’s Daily Nation.

4. The Tigray Wall
The Tigrayan opposition to PM Abiy’s actions – which began just about the moment he took power and began to breakup his predecessor’s influence networks – is also the source of major political schisms in the country.

Complete the form for your free download of The Africa Report’s 2019 Exclusive Ranking of Africa’s top 500 companies from last year. Get your free PDF by completing the following form.

Email Address *
Tigray’s ruling party, the TPLF, has been opposed to Addis Ababa’s reforms right from the start of Abiy’s term, including his move to roll the ruling coalition into a single party, and the recent decision to postpone elections.

“The central government is disregarding TPLF’s complaints that its officials were unfairly removed from federal government posts and that Tigrayan businesses and individuals are being targeted,” Bizuneh Getachew Yimenu wrote on 14 July.

“Above all, TPLF officials complain that Abiy’s administration is threatening the constitution. And the electoral board’s statement [on 24 June] that Tigray has no legal right to run a regional election will only have strengthened that belief,” Yimenu wrote in his post.
The TPLF is probably PM Abiy’s most formidable internal enemy, especially because it once held the reins of power before his ascension in 2018.

The nearly three decades of rule means that the party of Meles Zenawi not only has a bone to pick with PM Abiy for reshaping the ruling coalition and undoing most of its work, but it also has the resources and networks to worsen any of the multiple crises his administration is facing.

For example, the northern federal state of Tigray, lies on a significant part of Ethiopia’s border with Eritrea. While the two countries’ shared hostility precedes the rise of the TPLF at the head of the revolutionary forces of the early 90s, it worsened after parallel revolutions in both.

This makes the deal PM Abiy made with Eritrean President Isaias Afwerki untenable for the TPLF, which has continually frustrated the opening of the land borders.