Posted in Blogs
Author: admin  Published Date: 03/30/2021  Leave a Comment on Protest in South Africa over conflict in Ethiopia’s Tigray 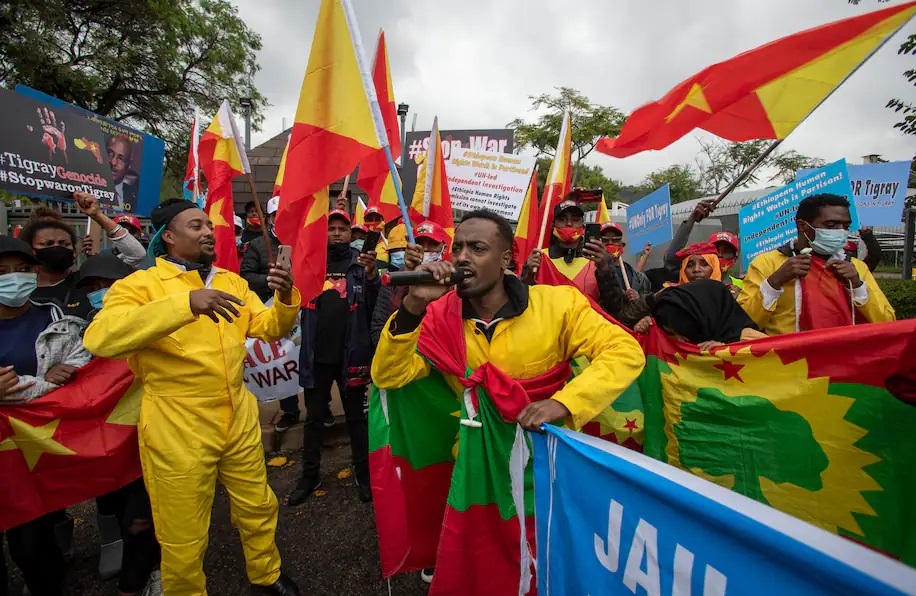 JOHANNESBURG — Members of Ethiopia’s Tigrayan community in South Africa demonstrated in the capital in a bid to bring international attention to the humanitarian crisis in the embattled region.

Thursday’s demonstration in Pretoria is their second in South Africa in recent months, as Ethiopian authorities face growing pressure to end the war in its Tigray province, home to 6 million of Ethiopia’s 110 million people.

The Tigrayan group in South Africa is demanding a United Nations-led investigation into the alleged atrocities and has questioned the credibility of the Ethiopian Human Rights Commission, a government-established agency, as an investigator of crimes in which government troops may be implicated.

The Office of the U.N. High Commissioner for Human Rights and the Ethiopian Human Rights Commission announced Thursday that they had agreed to carry out a joint investigation into rights violations in Tigray, where fighting persists as government troops hunt down the region’s fugitive leaders.
This does not appear to be enough for some members of the Tigrayan diaspora in South Africa.

“The decision to accept the offer (by the Ethiopian government) to join the investigation will reverse the call for an independent international UN-mandated investigation into the government-sponsored crime committed,” the group demonstrating in Pretoria said in a statement.

Human rights groups have raised concerns about the humanitarian situation in Tigray.

Prime Minister Abiy Ahmed on Tuesday acknowledged publicly for the first time that atrocities have been reported in the region and that troops from neighboring Eritrea had gone into Tigray. Abiy spoke the same day a new report by the Ethiopian Human Rights Commission confirmed some atrocities, including the alleged killing by Eritrean troops of over 100 people on Nov. 28 and the following day in the sacred city of Axum.

That report said the victims included pilgrims attending an annual religious event, with some “killed in front of their children, spouses and mothers.”

Eritrea had repeatedly denied its troops were operating in Tigray, and Information Minister Yemane G. Meskel said in a Twitter post on Thursday that “defamation campaigns against Eritrea have been ramped up” in recent days.

The humanitarian group Doctors Without Borders reported Wednesday that its staff had seen Ethiopian troops shooting and killing at least four civilian men in Tigray on Tuesday. Ethiopian authorities have not responded to that allegation.

Copyright 2021 The Associated Press. All rights reserved. This material may not be published, broadcast, rewritten or redistributed without permission.