Posted in Blogs
Author: admin  Published Date: 10/08/2021  Leave a Comment on Opinion: Ethiopia’s widening war could be catastrophic for millions. The U.S. needs to step up pressure. 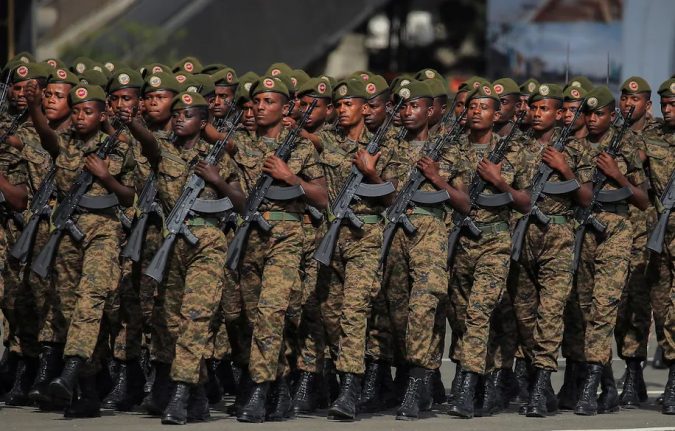 The Post’s View
Opinion: Ethiopia’s widening war could be catastrophic for millions. The U.S. needs to step up pressure.

Members of the National Defense Force march during a rally to celebrate Ethiopian Prime Minister Abiy Ahmed in Addis Ababa, Ethiopia, on Oct. 4. (Tiksa Negeri/Reuters)
Image without a caption
Opinion by the Editorial Board
Yesterday at 2:11 p.m. EDT

The rainy season is coming to an end in Ethiopia’s conflict zones, which means that the fighting season could be about to begin. Ethiopian Prime Minister Abiy Ahmed, freshly sworn in for a new five-year term on Monday, has been massing government forces near Tigray, a rebellious province in the country’s north. Barring de-escalation, the consequences — especially for the 6 million people of Tigray, at growing risk of famine — could be catastrophic.

De-escalation seems to be the furthest thing from Mr. Abiy’s mind. Three weeks ago he answered the Biden administration’s push for a negotiated solution with a three-page open letter in which he declared: “Ethiopia will not succumb.” More ominously, his government recently ordered seven U.N. aid workers in charge of humanitarian relief for Tigray expelled from the country, on the purported grounds that they have sided with Tigrayan rebels. The U.N. Security Council devoted a meeting to that issue Wednesday. U.N. Secretary General António Guterres denounced the “unprecedented” expulsions and warned of an “immense humanitarian crisis” — and Ethiopia’s representative responded by accusing the U.N. officials of falsifying Tigray’s plight.

Ethiopia’s ouster of the U.N. team came shortly after the chief of the U.N.’s Office for Coordination of Humanitarian Affairs had said Mr. Abiy’s forces were mounting a “de facto blockade” of Tigray, making it impossible for more than about 10 percent of needed food aid to reach the area and contributing to a crisis that has left 5.2 million people dependent on outside relief, of whom 400,000 are already living in near-famine conditions, according to the United Nations. Officials fear a repeat of the 1984-1985 starvation that Ethiopia’s then-ruling Marxist military regime engineered, in part to crush Tigrayan resistance, and which killed up to 1.2 million people.

The Tigray People’s Liberation Front (TPLF), which ruled Ethiopia — undemocratically — before Mr. Abiy’s rise to power in 2018, is hardly blameless. Its forces responded to a series of heavy-handed measures by the central government with a violent uprising in November 2020, triggering a joint offensive by Addis Ababa and its allies in neighboring Eritrea. The two nations’ campaign was marked by widespread human rights abuses. Yet the TPLF withstood it and counterattacked — seizing territory outside Tigray and committing atrocities of its own. Thousands are believed to have been killed in the war and 2 million displaced, numbers that are sure to rise if all-out combat resumes.

Until recently, Ethiopia was Africa’s fastest-growing economy, demonstrating a potential that makes the prospect of another era of famine and war doubly tragic. Seeking to avoid such an outcome, the Biden administration in mid-September announced new authority for sanctions on leaders of any side — whether Mr. Abiy or his foes — guilty of human rights abuses, obstructing humanitarian relief or blocking peace talks. Framed evenhandedly, the plan wisely anticipated Addis Ababa’s inevitable charges of bias. President Biden also delayed actual implementation — for what officials said would be “weeks, not months” — to give diplomacy yet another chance. Judging by recent events, it may soon be time to stop threatening pressure on Mr. Abiy, and start exerting it.