Posted in Blogs
Author: admin  Published Date: 03/29/2021  Leave a Comment on Indecision and Hesitancy Could altogether Derail a Worthwhile American Policy Toward the Horn of Africa 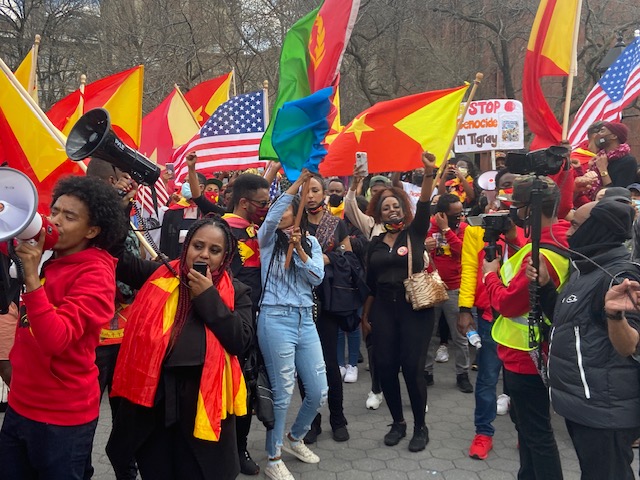 This editorial expounds and critically examines US foreign policy toward the Horn of Africa in general and the ongoing conflict and war in Tigray/Ethiopia in particular. American foreign policy regarding the Horn of Africa and the Red Sea geopolitical theater is inextricably linked to US diplomacy and international trade, much of which is facilitated via the great Red Sea that connects the Mediterranean Sea and the Gulf of Eden. This vital corridor, however, is disturbed and threatened by the wars in Yemen and the Horn of Africa as well.

In order to promote its own national interest, both in terms of preserving its strategic interests and security, thus, the US has attempted to either monitor or end the conflicts through diplomacy and other means. However, America’s overall performance in relation to the conflict and war in Tigray was characterized by indecision and hesitancy rather than exhibiting firm stand and/or coercive diplomacy.

When the war was declared and unleashed on Tigray by the Abiy-led government of Ethiopia on November 4, 2020, the global audience was not surprised because there was already confrontation politics, a sort of cold war, between the so-called Prosperity Party (PP) and the TPLF-led government of Tigray. But the world was stunned when the Eritrean troops, the Amhara militia, Somali forces, and UAE drones joined the chores of the Ethiopian Defense Forces (EDF) began to systematically destroy Tigray.

During the first two-and-half months of the war in Tigray, that is from November to January of 2020, some European countries and later a collective European Union (EU) voice began to oppose the war and instead called for a peaceful resolution of the conflict, but the Trump Administration did not show any interest in Horn affairs, let alone mitigate and end the war. Soon after Joe Biden was inaugurated as the 46th president of the United States on January 20, 2021, however, the new American administration, in no uncertain terms and without equivocation addressed the conflict in Tigray; President Biden and Secretary Blinken, to their credit, have clearly stated time and again that the war must end and that the Eritrean troops and Amhara militia must withdraw from Tigray as well.

Nevertheless, sometimes America vacillates in policy; some observers defined American stance as ‘double standard’, but I prefer to call it ‘indecision’ and ‘hesitancy’ especially in the context of the genocide and crimes against humanity committed by the Abiy Ahmed and Isaias Afeworki’s joint forces. Incidentally, the Tigray Global Advocacy Group (TGAG) has already filed criminal charges against Abiy and Isaias and wants to bring them before the ICC and face justice. Maybe the US is not interested in criminalizing the two Horn of Africa dictators, but it should at least hold them accountable for the genocide, crime against humanity, and aggression deliberately wrought by the regimes in Addis Ababa and Asmara against the people of Tigray, without exhibiting indecision and hesitancy.

America realizes that it is not the only actor in the Horn of Africa; there are some major global actors like Russia and China and regional actors like Saudi Arabia, UAE, and Turkey; notwithstanding the latter three relatively minuscule actors, the US should however seriously consider the Russian and Chinese involvements in Horn affairs.

Recently, the Russian ambassador to Ethiopia is believed to have said that “it is good that Abiy and Isaias agreed to end the war and that half of the Eritrean troops must withdraw and the rest half must stay in Tigray.” Although the Russian ambassador’s statement is bizarre and quite unacceptable to the people of Tigray, it is nonetheless a reflection of Russian presence and interests in the Horn. In light of this reality, thus, if America does not pursue realpolitik and on the contrary exhibits indecision and hesitancy, it can lose ground and its worthwhile policy toward the Horn of Africa could be compromised at best or totally derailed at worst.

The other important issue that the US must pursue without hesitation is the demand of the withdrawal of all Eritrean troops and Amhara militia from Tigray. But the US should be extra cautious and seriously investigate the deceptive behaviors of Abiy Ahmed and Isaias Afeworki; these men are known for their deceit and prevarication, and they should not be given any benefit of the doubt, let alone trust their verbosity. Abiy Ahmed especially is duplicitous; he is almost like two men in one (split personality), saying one thing today and then doing something contradictory the next day. All along, since he declared war on Tigray, Abiy argued that there were no Eritrean troops in Tigray; now, he admits that there are Eritrean forces in Tigray.

Last week, after Abiy traveled to Asmara to consult his comrade-in-arms Isaias Afeworki, following their usual secretive meetings accompanied by their duplicity and trickery, they extended some conflicting statements with respect to withdrawing Eritrean troops, but this could mean, as always, a cynical device to hoodwink the world public opinion. On the one hand, they said they will take action to withdraw the Eritrean forces, but on the other, they claimed that Eritrean forces are at the border only, when in fact a massive Eritrean army is all over Tigray, and the local people can safely assume that the Eritrean troops will wear, as they have done it in the past, EDF’s uniforms and stay in Tigray indefinitely.

There is no doubt that Abiy and Isaias are prepared for a long-out war in Tigray and they have no intention of resolving the conflict peacefully, and unless a decisive American policy is in place, they could create havoc to the entire Horn of Africa. In fact, as we write this editorial, a significant number of buses from the military camp (Tor Hayloch) near Addis Ababa have begun moving toward the war zone of Tigray. This is a clear indication that Abiy and Isaias indulge in a war-torn economy and their mission is to destabilize the entire Horn region, and as far as Isaias is concerned the continuation of the war in Tigray is a blessing for him because he lives in conflicts and on wars; he had antagonistic relations with all his neighboring countries; and he conducted wars against Sudan, Djibouti, Yemen, and Ethiopia; wars are lifetime career for Isaias Afeworki and unless he is stopped, he may think that the US and his Arab mentors have given him the green light to undertake excessive violence against his people and neighboring other people.

Given the deceptive behaviors of the two leaders, and in view of the crimes beyond human imagination they have committed against the people of Tigray, the US should take decisive action, not only for the humanitarian needs of the people in the war zone but also for its own national interest, and this is pragmatic politics at its best. If America implements the ideas incorporated in this editorial, it will once and for all change the global perception of fear but not respect to the United States. We at IDEA have confidence that the United States, with the visionary leadership of President Biden, will contribute to the real peace and stability in Tigray/Ethiopia and the rest of the Horn of Africa. That will be the day!