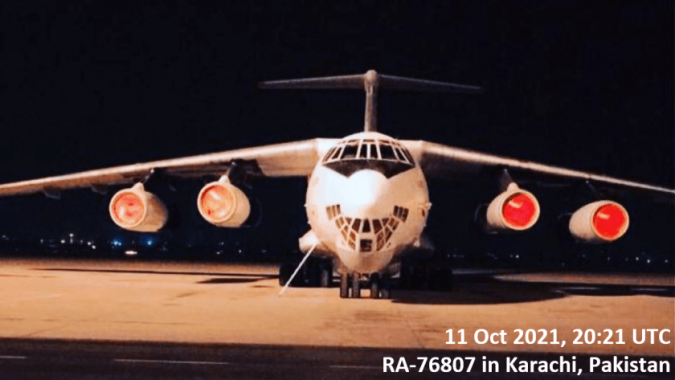 The precedent
On 17 Sep 2021, I reported the arrival of an “Antonov Airlines” Antonov An-124 reg. UR-82029 to Harar Meda Military Airport in Ethiopia. The flight arrived from Chengdu, China, and made an overnight stop in Islamabad, Pakistan. According to Oryxspioenkop1, this flight could be related to the arrival of Wing Loong I UAVs, since Chengdu is where the Wing Loong I is produced.

Despite MLAT being a major limiting factor, I was able to establish that the Il-76 was tracked landing around Chengdu, China, around 05:50 UTC on the previous day, 11 Oct 2021, thanks to positionless Mode-S data. Her exact take-off time on that day remains unknown.

Like the earlier “Antonov Airlines” flight, also the “Abakan Air” made an overnight stop in Pakistan (11-12 Oct 2021): the aircraft was spotted by various people on ground at Jinnah International Airport, Karachi, Pakistan, including the picture shown below.
Positionless Mode-S data shows that flight AZS3901 took off from Karachi, Pakistan, on 12 Oct 2021 around 05:30 UTC. About five hours later, she was tracked by a receiver in central Ethiopia, which tracked her descent to Harar Meda Airport around 10:45 UTC. The aircraft remained on ground for about two hours, when she left Ethiopia, possibly to Djibouti4.

Big thanks to the various people that helped me gather details on this flight. Without their help, making this blog post would not have been possible.