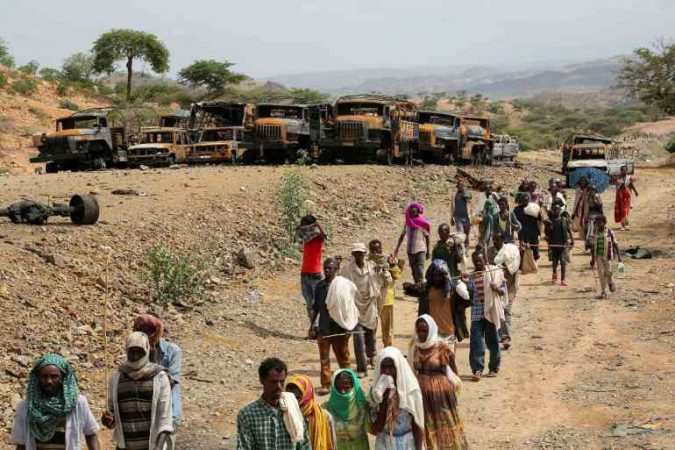 Current situation: all of them are evicted from their homes

Where are they now: in the outskirts of the town during this very night

Who protects them: there is no one to protect them from any form of attack

Background
The Amhara militiamen, Amhara vigilante group [Fano], and Amhara Special Forces [ASF] rounded up St Teklehaymanot Orthodox Church on the 3rd of November 2021 while thousands of people were attending a morning prayer. It was the monthly holiday of Abune Teklehaymanot [a holiday commemorated every month on the 24th, Ge’ez calendar].

These invading forces separated males above the age of 11 and took them to two concentration camps inside Adebay:

Youths are locked inside a big warehouse of Mekonnen Roto [an oil station owner]
Elders are put inside the buildings and sheds of Cooperative Shop of the administrative unit of the district [ሕብረት ስራሕ ማሕበር ሹቕ].
The Amhara invaders not only targeted those who were at the church but also went door-to-door throughout the town searching for males above the age of 11. They took everyone to the above mentioned concentration camps. These who have been harassed & traumatised at the concentration camps are estimated to be about 4500 – 5000 in number.
On November 3rd and 4th, the Amhara invading forces were on a killing spree hunting after everyone who tried to escape from the round up.
Many people are presumed to have been killed during those two days. There are some people who made it safely to Sudan, leaving behind the bodies of their loved ones who were fleeing alongside them to Sudan. Hence, the massacres can be corroborated from the very eyewitnesses who are now inside Sudan.
It is heart-wrenching to hear from the witness on the phone that many youths have been massacred trying to escape the round ups & flee to Sudan. Moreover, many more have drowned and been taken by the Tekeze River due their inability to swim when they were escaping through the highly militarised area of Western Tigray.
The witness boldy underlined that the Amhara invaders have been very serious never to allow Tigrayans to flee to Sudan. This has put extra pressure on the youths who have been trying to escape. That is why many drowned because they rushed towards the river without checking whether it was full or not or whether the flood was strong or not. And in multiple cases, the Amhara invaders would rain bullets on the youths when they were still inside the river trying to swim towards safety on the opposite side of the Tekeze River. In some cases, the youths get caught by the Amhara militiamen, Fano, and ASF, and they end up in the biggest concentration camp at Humera. Their next fate has never been known yet.

For the last 3 weeks, the Amhara invading forces and group of youths in civilian clothes but carrying kalashinkovs were going house to house during the nights to loot precious properties, smartphones, and money from the households in the absence of the husbands, fathers, and brothers. Hence, the mothers, wives, and sisters were at the mercy of these merciless invaders. The screams of these helpless women, girls, and children have been the most familiar voices during these 3 weeks. Only God knows the scale of horror they have been through.

On November 21, 2021, early in the morning, these invading forces went door-to-door and ordered every household to get out of their homes carrying only their clothes, nothing more, but their clothes.

Every woman, girl, and child was on the streets of Adebay for the whole day, languishing in the strong son without any food and water to drink. The invading forces of Amhara told these helpless people that they would be sent to the Tekeze River. Nothing more, all they heard was the voice “you will be taken to the Tekeze River.”

Then in the evening, the Amhara invading forces told the victims that they should go back to their homes because the trucks could not come.

On November 22, 2021, at 8:30 am [Adebay Time], the invading forces of Amhara went door-to-door once again and ordered the households to leave without holding anything but their clothes.

Some of the women carried food for lunch and in some cases for the whole day. Then, the invading forces paraded the women, girls, and children under 11 years of age to the outskirts of Adebay towards Sheraro. When they were taken for about 40 minutes on foot, the invading forces commanded them to stop and stay there until trucks would be ready for them.

Later, the Amhara invaders told these women & girls that they should spend the whole day there, once again burning under the strong sun without having a shelter to protect themselves from the sun.

Then, the Amhara invading forces brought 4 mini-buses & 3 trucks to load not the women & girls but elders among the men who have been languishing in the concentration camps for 3 weeks. These 7 vehicles passed via the outskirts of Adebay towards the Tekeze River, in the direction of where the women & girls were staying along the street outside of the town. The Amhara invading forces told the women & girls that they have decided first to transport the elder men front he concentration camp towards the Tekeze River and then they will be transported next.

Dear human beings across the world, in the name of whomever you worship day in and day out, I am pleading with you to be a voice for these voiceless, innocent, helpless, and poor people.

Why should such a barbarity happen to innocent civilians in the 21st century?